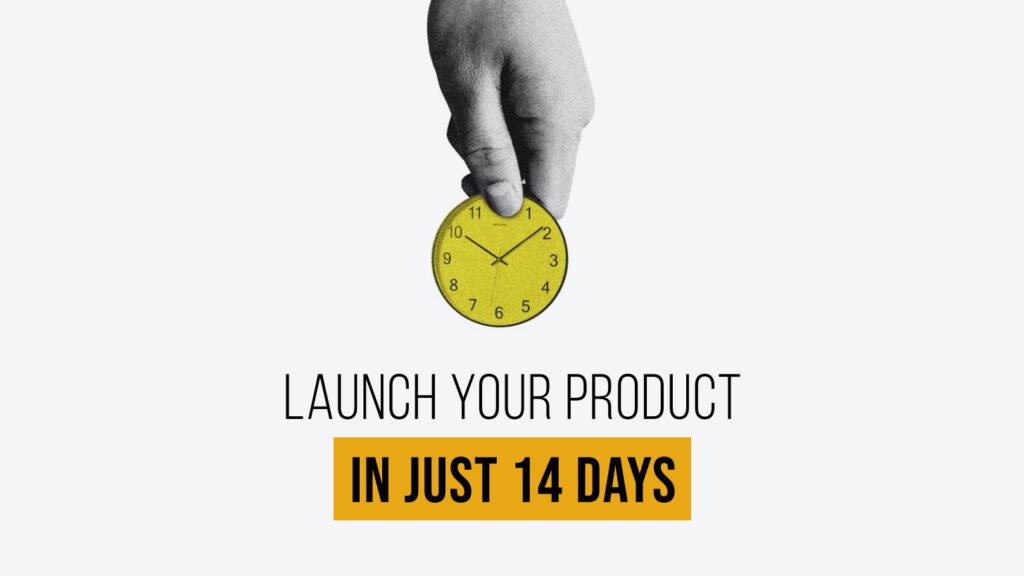 Short on time? You’re not alone. As we get deeper into the second half of the year, launching campaigns quickly becomes more important the closer we get to the holidays, which is always a rough time for the crowdfunding industry.

In this case study, we’re going to go over how we scaled and launched Lomi, a $7.1 million campaign, in just 14 days. We’ll dive into strategies we used to spend hard while keeping our metrics stable, which resulted in a massive pre-campaign list of over 26,000 leads that converted at a 6.67X return on ad spend (ROAS).

If you’re on a tight timeline and are concerned about launching without a strong pre-campaign, don’t worry – we can do this for you too.

Partnering with Lomi by Pela Earth

In February 2021, Pela Earth approached LaunchBoom to crowdfund a sustainable food composter called Lomi that would launch on Indiegogo in April.

They knew that LaunchBoom was the leading crowdfunding agency for green-tech and sustainable energy products, so it was only natural to partner with us for this campaign.

Pela is an established brand that created the world’s first compostable phone case, and had a massive following and customer base already, so we knew it was going to be a great launch. Our team was excited to get things started. 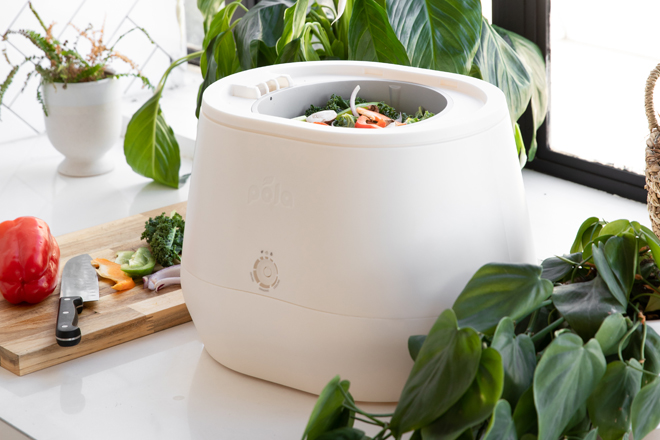 Pela had creative assets and messaging complete for Lomi. That really helped expedite our process since we didn’t have to create it for them.

One of the longest parts of our setup process is creating visual assets to use for marketing. It takes time for our clients to send us the prototype, for us to book models and locations, edit the photos, and build them into our designs and advertisements to start generating leads.

Pela having all of these assets ready to go made it easy for LaunchBoom to focus on what we do best: build a monster pre-campaign list that generates the highest returns in the industry.

Without having to worry about creating any marketing assets, we were able to focus solely on our proven pre-campaign system. This was critical in allowing our team to scale hard and launch the campaign in just 14 days.

Pela had a huge budget set aside for our pre-campaign advertising system to drive high-converting leads on launch day.

How did we do it? Let’s break it down.

Two key Facebook advertising mechanics we used in our Pre-Campaign

Spending over $84k in 2 weeks and keeping metrics stable is no easy feat, but having a huge budget allowed us to feed Facebook the data it needs to keep performance consistent.

With lower budgets, keeping more control in your hands and setting budgets per audience can often be more effective than allowing Facebook that much freedom. The reason for this is that with lower spend, you have less conversion events for Facebook to learn from, and Facebook will not be able to optimize its spend properly.

However, with very high budgets and great performance, Facebook had all the data it needed to spend extremely effectively.

A Cost Cap tells Facebook the maximum amount you’re willing to pay for a conversion event. For example, we can tell Facebook that the most we’re willing to spend for a $1 Reservation VIP is $25. Facebook will then optimize its delivery accordingly to try to hit that goal.

Similarly to Campaign Budget Optimization, if you don’t have a large enough budget or strong enough performance, Cost Caps can backfire. With less data points, we often see Facebook either ignore the Cost Cap and pay way more than we want, or it won’t spend at all.

In this situation, our expert digital marketers recognized the perfect combination of performance and a substantial budget. We utilized both of these mechanics together to spend very aggressively and keep our pre-campaign metrics well within our goals.

These two mechanics, combined with incredible audience targeting and ad creative, is what allowed us to generate a 6.7X ROA on over $84k in spend in just 14 days. 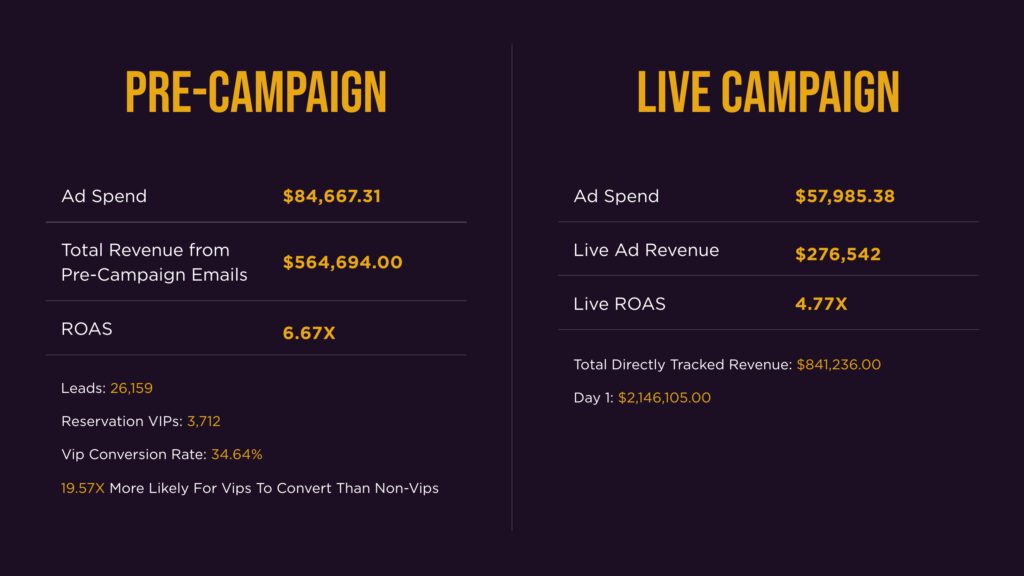 We carried our success into Live Campaign advertising

All the data we generated from the pre-campaign gave us a great head start on how to advertise the live campaign.

We plugged our best creative assets into new lookalike audiences and top performing interest audiences, and drove close to a 5X Return on Ad Spend for the duration of the live campaign.

Overall, the campaign ended at $7.1MM! 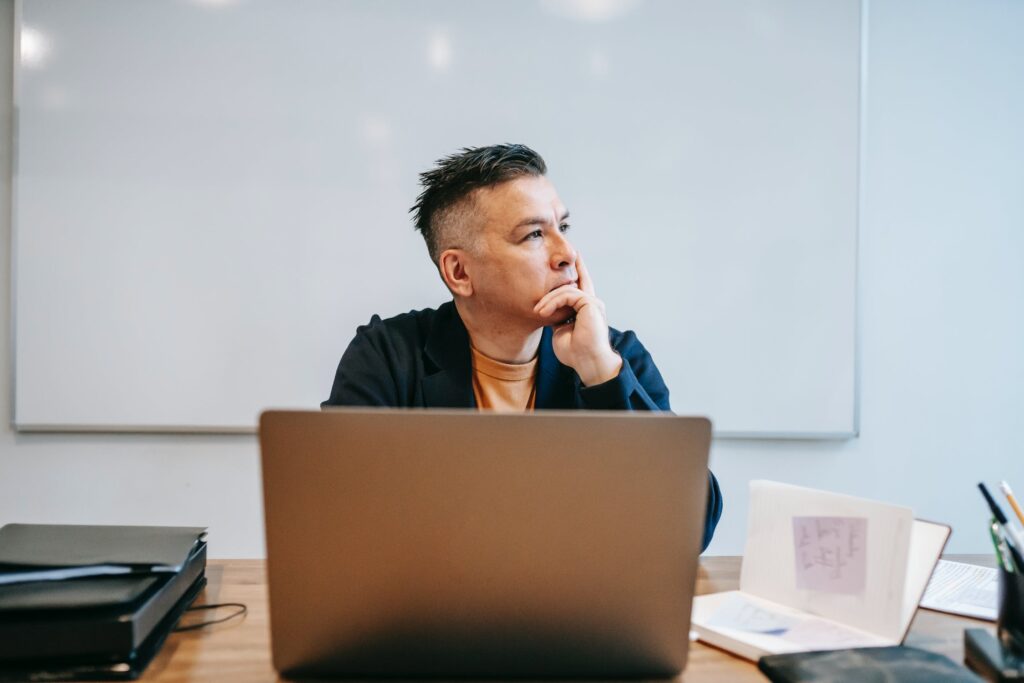 Is an accelerated launch right for you?

If you’re on a tight timeline, do not make the mistake of launching without the most important part: a strong pre-campaign. As you’ve seen, our pre-campaign system is capable of generating a huge list with an incredible return on ad spend in a very short amount of time. The result… a huge launch and an even bigger campaign!

If you are a product creator with strong products and complete creative assets ready to go, then adding LaunchBoom’s pre-campaign system to your launch strategy is a no-brainer!

The quickest way to learn if this is right for your product is to pick a time on our calendar to set up a call with us.

Talk to you soon!