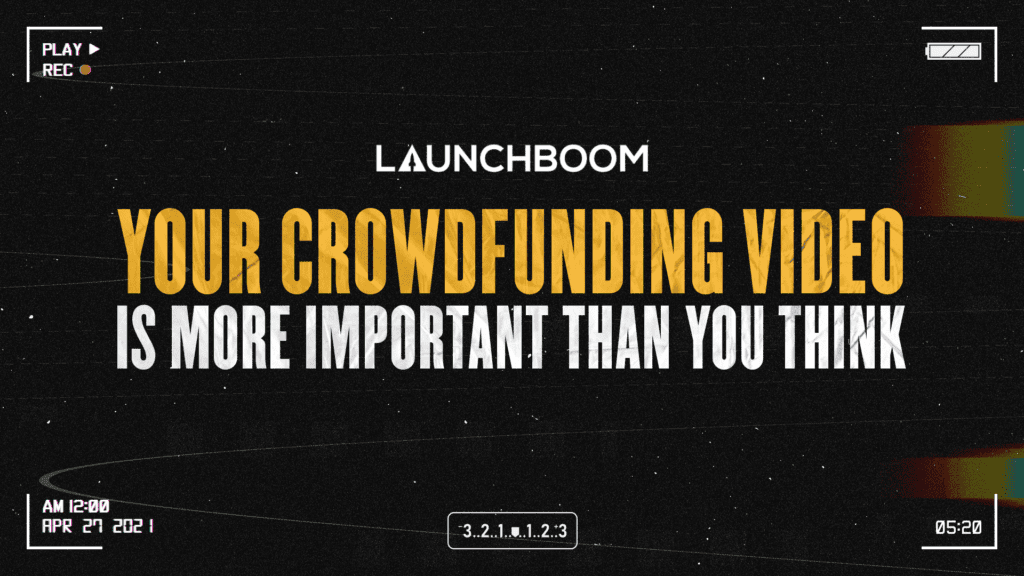 What is the most important element of a crowdfunding campaign? Some will say the product, the audience, or advertising dollars. While those responses are valid and vital to the success of a launch, the most important element within a campaign is the video. There is an overwhelming amount of evidence pointing to the video as the key component of a crowdfunding campaign and proving it is not something a creator should take shortcuts on. It is too important to the success of the launch when it comes to visibility and telling the story of your brand long-term.

Before we examine video content and the significant role it plays in the success of a crowdfunding campaign, let’s first delve deeper into videos and video marketing itself to gain a better understanding of what makes it a non-negotiable in all marketing, not just crowdfunding. According to digiday.com, Facebook has over 8 billion video views per day. YouTube’s blog states their viewers watch more than 1 billion hours of video content PER DAY and tweets containing video on Twitter generate 10x the engagement than those without. If that’s not enough support for video marketing, you may as well stop reading at this point.

Of the five human senses, vision is by far the biggest transporter of information to the brain. So when people can see something they like, naturally it is more appealing and more impactful than if they read or hear about it. Video also caters to the 21st century’s short attention span. When a person can learn the critical facts and functions about a product by watching a two-minute video on their smartphone, they are much more likely to purchase a product as opposed to having to spend ten minutes reading about it. Video content has become the new version of a sales organization.

When it comes to a crowdfunding campaign, clicking the play button on your video is most likely the first action a potential backer will take upon landing on your campaign page. This means a creator and their video must make a first impression that both inspires a purchase and propels the brand into a larger audience. In addition to being the story of the product, company, and brand, a crowdfunding video is the explanation of the value a product brings to the user and the demonstration of how it solves a problem. All this story-telling is done in two and half minutes or less (remember: 21st-century attention span = very short) and it needs to be crafted so it forms a personal connection with the person watching the video.

How does a creator know how to connect with an audience? Before investing the money and time to produce a video, the audience and the type of content that drives engagement and conversion should have already been established. Remember, the foundation of every campaign we launch here at LaunchBoom is testing. All creators must invest time to test multiple messaging and positioning approaches to learn what engages and excites their audience. Was the most effective content humorous, serious, or straightforward? Once these learnings are established, let them drive the direction and content of the video. By testing first, you ensure that no audiences are left out and the video relates to everyone involved in your brand community. There is no bigger waste of time, money, and resources than video production that misses the mark!

One goal of a campaign video is to tell the story of the product and showcase its features. Another is to be that new version of a sales rep as mentioned above. So how is a video a sales rep?

First, a well-produced video will keep visitors on a campaign page longer. The longer they stay, the more likely they are to purchase.

Third, the voiceover at the end of the video needs to ask the viewer to back your campaign. This seems obvious, but there is a significant amount of sales reps that don’t, won’t or can’t ask for someone’s business. If you don’t ask, you won’t sell. With the right content to generate a high volume of views, a campaign video will inform and ask an untold amount of audiences to back a campaign. That will do wonders for a creator aspiring for a significant return on ad spend (ROAS).

When Insider.com promoted the baKblade video, it drove six figures of revenue in four days. That is an amazing ROAS based on the production cost of the video. Budget for marketing strategies such as digital advertising or PR is ongoing and often very high, and the return on investment is unpredictable. Video production, however, often has lower costs. Additionally, due to its versatility across multiple platforms, video will often yield a substantially higher ROAS for a creator.

You can also increase your ROAS by using video for campaign updates. Create short video messages updating the achievements and highlights of the campaign at certain points. These video updates can be used to announce new offers or perks in the campaign. This will maintain engagement (remember, watching is a better method of consumption than reading) as well as inspire new backers. It can also potentially drive additional revenue from those who have already backed the campaign.

Video is addicting. Remember Facebook has over 8 billion video views per day and 1.84 billion active users. Do that math, and see that is 4.3 video views per day per user. Creators should use videos’ addictive characteristics to create content that audiences and search engines can’t ignore. Effective and well-produced videos will stick in the minds of those who watch. As LaunchBoom CEO Mark Pecota writes in the book CROWDFUNDED, video controls the conscious and subconscious experience of the person watching. That sounds like an addiction, doesn’t it?

Crowdfunding campaign creators preparing to launch their brands need to devote a considerable amount of time to their campaign videos. Not only does the short-term success hinge on that video, it will have long-term impact once the video is used on an eCommerce site or is repurposed for other types of marketing content. Potential backers will rely on that video for inspiration and motivation when deciding whether or not to back a campaign. The video will multitask as the newest addition to your sales team. It should tell the story of how the product came to be, as well as communicate the value it brings to solve a problem or fill a need that your audience has. It also needs to do all these things in a way that is entertaining, inspiring, and memorable.

Ready to talk with us about making a video and launching your campaign? Apply to work with us today.