The top 3 reasons why crowdfunding campaigns are unsuccessful 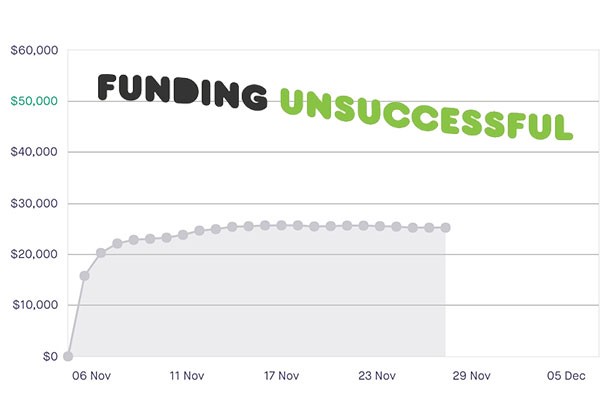 63.5% of all Kickstarter campaigns fail.

Yes, that number is correct.

I remember the first time I saw this number I was shocked.

But then after experiencing crowdfunding campaigns for the past 5 years, I started to see a lot of the same mistakes made over and over again…

And there were 3 mistakes that stood out above all the rest.

Mistake #1: Not building a community before you launch

The most common misconception is that marketing should begin after the campaign launches. That’s because many people have heard that Kickstarter has a huge community.

They aren’t wrong. Just look at these stats on Kickstarter’s monthly traffic.

What they do get wrong is thinking Kickstarter’s traffic is going to magically find their campaign. (As of writing this, there are 4,099 live projects on Kickstarter. That’s a lot of projects!)

Much of Kickstarter’s traffic is browsing their “Explore” page which shows the different projects in their categories. The goal is to get high up in those rankings which operate a lot like Google Search: the higher you are in the results, the more clicks you get.

So how do we get high up in the rankings?

You have to drive some of your own traffic to the campaign first.

Once Kickstarter’s algorithm sees your campaign doing well, you will get a higher ranking in both their “Magic” and “Popular” rankings, which are the most browsed filters.

This is why it’s so important to start your marketing efforts months before your campaign even launches. And when I say “build a community” I mean a group of people that you feel confident are going to buy your product when you launch.

I’ve seen some great products launch that fail because they didn’t message it properly. Meaning they didn’t effectively communicate to the market the value of their product.

The biggest mistake made here is overcomplicating the messaging.

I find it helpful to start with the questions: what problem am I really solving & how am I solving it?

With those answers, I create what I call the “tip of the spear” messaging. Meaning, when describing the product, what will I lead with every time that resonates the most with my customer?

For example, we recently launched LoftTek Adventure Jacket on Kickstarter that has a lot of features…

But when it comes down to the “tip of the spear”, we say it’s an adventure jacket with the world’s most advanced insulation.

That piece about having the “world’s most advanced insulation” stops people in their tracks and makes them want to know more.

#3 Not getting through the “valley of death”

I’ve also experienced campaigns that did not make the two mistakes above and still were unsuccessful. Instead, they celebrated their early success, but then to their dismay… the backers stopped coming in.

I like to call this period of the campaign the “valley of death” (very melodramatic, I know).

Check out this KickTraq chart from a campaign we launched — Neck Hammock.

The valley is that dip in pledges you experience very soon after the initial launch. And after a big launch, it can be a pretty jarring experience, but getting past it is very possible.

The best way to successfully navigate the valley of death is to have a strategy around digital advertising and PR. We go into more detail on how to execute these strategies here.