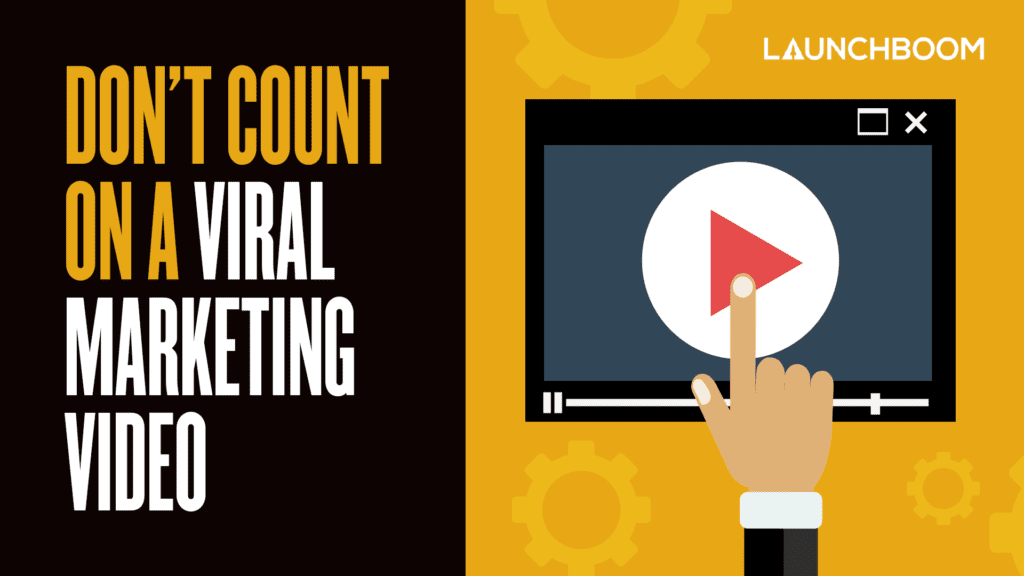 There are a lot of things that should be in your total marketing plan: testing, pre-launch email collection, live campaign advertising, a post-campaign survey, a seamless transition to InDemand… but don’t rely on a viral video taking off and doing all of your marketing for you.

In a recent webinar, a viewer related the following story:

The startup I work for is run by two older gentlemen. They are convinced that our product is strong enough to achieve success through going viral. They want to skip spending money on crafting a funnel pre-launch or investing in professional video assets. What advice would you give in this situation?

Our first reaction was that this is a terrible idea.

No matter what your product is or how well your brand is doing on its own, you can’t count on any part of your marketing plan to go viral. There’s no formula for it; there’s no secret “go viral” button that you can push and launch your campaign to millions of people without putting any ad spend behind it.

On top of that, there’s too much noise out there right now to hope for a truly viral marketing campaign. With everything going on in the news and in the world, there’s almost no space out there for something to take hold and spread like it might have in the pre-COVID era. (And though the COVID noise is on its way to being over, there will always be something there to pop up and take its space.)

If we take a step back, we can start to see that “going viral” isn’t something that happens by chance. It’s not random, and it’s not something that happens without a ton of work going into it. Products that go viral are virtually always based in strong campaigns and managed down to the last detail. Things that go viral organically are few and far between; everything else is specifically designed to look like it went viral without any work. That’s really not true at all.

Think about the Dollar Shave Club viral video. It has over 27 million views; it was so popular the day it launched that their website actually crashed due to all the traffic. There’s no doubt that it went viral, but it took a lot of work to make that happen. The video took time and money to write, construct, film, and edit. It’s a fully produced commercial that happened to catch the internet’s attention when it was launched, but that wasn’t part of founder Michael Dubin’s plan.

“I don’t think you ever really think you have something,” Dubin said in an interview with CNBC. “I knew the script was good enough and that it communicated what our business was about, but I didn’t think it was going to be a home-run viral sensation… That wasn’t part of the calculus.”

The video was just one part of their overall marketing strategy. They weren’t relying on it, because they knew they couldn’t count on it bringing in all of the business they’d need to keep themselves going.

Your marketing plan should always include a funnel… which is just a fancy name for the way you get people to learn about and purchase your product. A well-planned funnel includes actions you can take and steps that your potential buyers will go through. There’s no “and then it goes viral!” stage, because that’s not something you can control. If you can’t control it, then you can’t count on it.

A well-planned funnel starts gathering leads well before your campaign launches. Your pre-campaign stage is all about getting people interested in what you’ll be selling and then getting them to commit to backing your project. Keep in mind that you can only count on 1-4% of your email list actually converting; you’ll be in a much better position if you use a reservation funnel, because you can count on around 30% of that list making a purchase once your campaign is live.

There’s no limit to how long your pre-campaign can run. Be honest and upfront with your community about your timeline, and communicate with them regularly with whatever updates you have (good or bad!). If you build your community before you launch, then your launch will go smoothly and you won’t worry about hitting your funding goal—and you’ll be able to rely on it instead of crossing your fingers and hoping that your campaign video goes viral.

When it comes down to it, marketing is just like everything else in the world: the better your input, the better the end result will be.

Want help with your marketing plan, your video, or any other part of the crowdfunding process? Apply to work with us today!