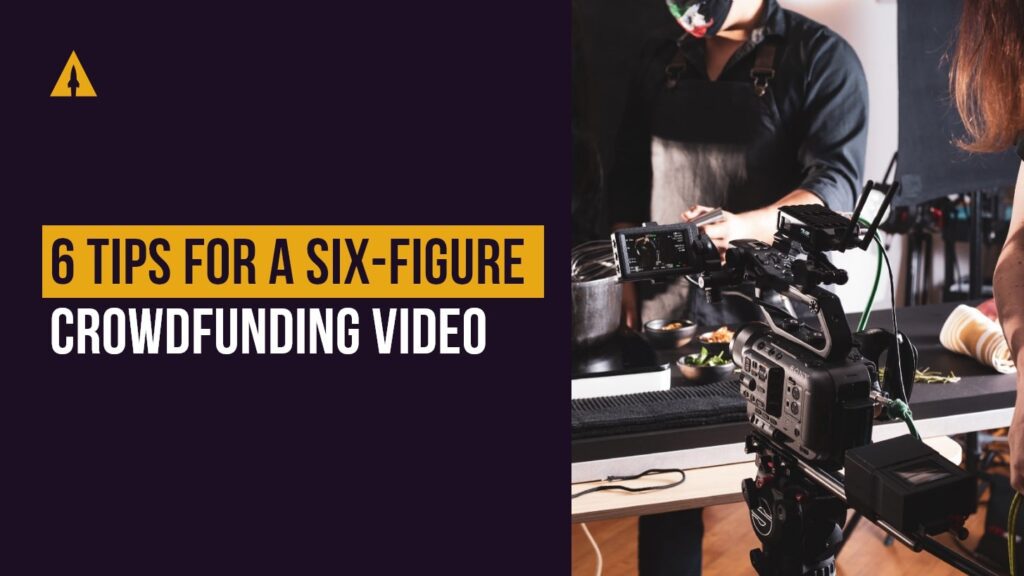 If you’ve read the original post for this article, you’re in for a surprise. We’ve learned a lot in the past 6 years and are due to update you on what’s different. Though the core ideas haven’t changed too much since 2016, the details have. Here are 6 better tips for a six-figure crowdfunding campaign video in 2022.

Video Tip #1: Get to the point

The original tip here was “start with a strong hook”–no duh! By now, most people know that you have less than 5 seconds to grab your viewer’s attention. It might even be 1-2 seconds now. But what makes a strong hook for a campaign video?

We’ve seen (and created) a variety of videos with a variety of different campaign video hooks like funny jokes, awe-inspiring footage and compelling questions. Yet, what consistently seems to work the best with campaign videos is getting to the point.

What do I mean? Whether it’s your product’s USP (unique selling proposition) or the primary problem that your product solves, your campaign video needs to start with the #1 reason why your backers should want your product.

Sometimes the hook is the pain point simply presented–like in our BusyBox video:

And sometimes it’s as simple as getting right to the product and showing how cool it looks (because that’s its unique selling point) like in our Xion CyberX video:

In both examples, we get to the point within a few seconds. BusyBox lets others know you’re busy without saying a word. Xion CyberX is the coolest-looking eBike to come on the market. And we see the product almost right away.

Here’s my theory on why this is so effective: people aren’t looking to be entertained by your campaign, they just want to know if they should buy (back) your product.

When someone lands on your campaign page, they’ve gone through at least one if not several points of contact in your funnel–an Instagram ad, a landing page, an email blast, the Kickstarter thumbnail, a shared post or all of the above. By the time they’re clicking play on your video, they’re already interested in your product and want to learn more about it.

So, logically, the best hook you can make is one that just gets straight to the point. What pain point are you solving? What’s so special about your product?

This applies not just to campaign videos but to video ads as well. People know it’s an ad, so you might as well get to your pitch. If they resonate with the need, they’ll stop and watch more. If not, they’ll keep scrolling.

Please note: though this crowdfunding campaign video tip also applies to ads, it does not mean it’s the only kind of hook that works for them. Video ads are on a completely different platform than campaign videos and don’t have as many, if any, touchpoints prior to being viewed. As a result, the strategy behind video ads can be drastically different, even though some of the tactics are the same.

You’ve likely been told dozens of times by dozens of bloggers/marketers to “tell a story.” The truth is stories can be very powerful, but not everyone has a story. Moreso, not every story sells.

A much better approach is to ask the question: what value does your product provide? If you focus on that single message, you don’t need a story; your product will sell itself. Let’s take a look at three different examples where this video tip applied.

Our video for Bubble Hotels did exactly that. Instead of focusing on the founder’s story, we focused on the value of the space he was creating. The video was focused on showcasing the beauty of Joshua Tree and the refinement of the space he planned to build.

With that video, we helped raise over $800k on Indiegogo.

If you’re having trouble simplifying the value your product brings, try answering the following questions:

This rubric is essentially the same one used by the most common crowdfunding story template: “the founder’s journey.” You tell how you as the founder encountered this problem personally, tested all the different current solutions to no avail, then sought to create the ideal solution yourself by inventing your product.

One of our first crowdfunding videos for 1HourBreak followed this rubric exactly. They raised over $100k without ad spend and used that video for their continual e-commerce sales to scale their business beyond that.

Sometimes your product doesn’t solve a very relatable problem but is just fun and innovative. Showing the value still applies, it just means you can be much simpler with your approach.

For example, Author Clock doesn’t solve a huge issue. Its value was simply in its innovation–a clock that tells time through book quotes. It was fun, inspiring, and a bit quirky. So we embraced that and made a video that shows its value rather than telling it.

It raised 1.3 million dollars on Kickstarter.

A lot of creators like flashy tactics to make their videos come off as cool. But when it comes to making a great campaign video for Kickstarter or Indiegogo, one rule prevails: keep it super simple.

Similar to tip #1 and tip #2, the best thing you can do to convince people to convert is teach them about your product and show the value. Everything else is just fluff.

Don’t over-complicate your features either. You don’t need to go over every colorway or explain the super technical engineering that makes it 1% easier to manufacture. Keep your language and your pitch short, simple and clear.

Cut out all extraneous features. LaunchBoom’s Creative Producers and I always focus on the #1 reason why people want a product and the top 3-5 features that help to communicate that value or address concerns.

If you need help doing this, answer the following questions with only one sentence per question. No compound sentences allowed:

Your simple one-sentence answers to those questions can be the foundation of your script. Maybe even be the script itself!

The video we produced for Top Shelf Camera Bag follows this rubric almost to the tee, and also employs a hook that gets straight to the point.

This tip hasn’t changed. But, it goes beyond just having a simple call to action. What I want you to remember from this tip is that your campaign video needs to convert backers. It’s not trying to be viral. It’s not focused on entertaining viewers. And it most certainly shouldn’t be a way to rub your ego (believe me, we’ve seen a few).

The video and the campaign page together play the role of the closer, and you’ve only got a couple of minutes of attention to close the deal. This means that everything in it needs to be optimized to communicate value, earn trust and address concerns so a viewer will back.

1) You need to be harsh with cutting out anything that doesn’t add value. The biggest mistake I see in campaign videos is that they spend too much time on things that don’t matter to their backers. These can be features that aren’t very strong selling points, jokes that don’t relate to the product (and don’t land very well either) or beauty shots that are redundant. A scene either helps sell the product better, or it doesn’t. If it’s the latter, cut it.

2) Know what your audience’s concerns are. There’s an easy and accurate way to do this: look at your ad comments.

Those comments that make your stomach churn? Yeah, those are the ones you need to dive into. That hard-to-swallow feedback can sometimes be the best way to understand why people aren’t converting.

For example, we learned from our Author Clock ads that people were turning away from the product because they didn’t believe it could provide quotes for specific obscure times, like 3:26 pm or 1:18 am.

So, in the video, we specifically showcased some times that were very oddly exact. Our tests for this showed a significant increase in ad conversion, which led us to believe it would likely increase video conversion as well.

That said, definitely take ad comments with a grain of salt. There are a lot of haters out there, so be sure to distinguish the trolls from people who just need some more convincing.

I mean this quite literally. We live in an age where Photoshop and visual effects pervade every corner. There are whole Youtube channels built off of debunking fake videos and complete subreddits dedicated to photoshop battles. Proving that you and your product are real is going to do leaps and bounds for establishing trust in your campaign.

You don’t need to be ultra-authentic or vulnerable. Just don’t use an overly commercial-sounding voiceover and try to decrease your use of renders as much as you can. A simple, uncut video of your product functioning as promised will not just earn you Kickstarter approval or Indiegogo credibility but can be a powerful asset for conversion and lead generation.

This example is not a campaign video, but it was one of our best performing ads for our eCommerce client, Xebec, and helped raise millions of dollars for them.

Video Tip #6: DO NOT make a professional-quality video

This is the only tip that I’ve completely flipped around (my original tip was “Make a Professional Commercial”). I admit that I was wrong. You don’t need a professional video to have an amazing campaign. This is coming from someone who has made a living making professional campaign videos.

Here’s the truth: your backers don’t care about the camera you used, the lights you rented or the size of your crew. They care about the value your product creates for them. Focus on that value, get to the point, keep it simple, be real and always be closing. You’ll find yourself raising more $$$ with a video shot in your living room than a $50,000 video that focuses way too much effort on trying to be “cool” and “professional.”

Want proof? Here’s a video we edited for Give’r Mittens–100% shot by Bubba, the founder, and his team with GoPros and iPhones. Our only two directions for them:

Oh, they raised $1.3m with that video on Kickstarter. And those mittens are now sold in outdoor stores like REI and HuckBerry across the nation.

All of that might have felt like a lot to take in, so let’s quickly review some of the key points from this article.

There you have it. 6 actually useful and actionable tips to make a six-figure (or seven-figure!) campaign video. I’m sorry it took so long to update. We’ve been learning as well.

Remember, your campaign video isn’t the only thing you should think about. There are many other moving parts to get you to six-figures and beyond on your crowdfunding raise. If you want to learn more, schedule a call with our team. We’ll help guide you to the right place to take your product launch to the next level.